Summary of the heraldic history of Gallargues and Gallargues-le-Montueux 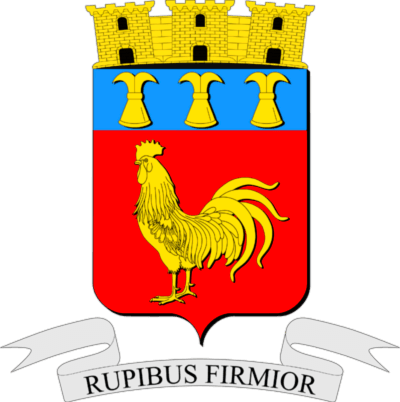 “Gules, to a rooster Or; a chief sewn Azure, charged with three chessboard rocks Or.”

Coat of arms created by the municipality in the 1980s 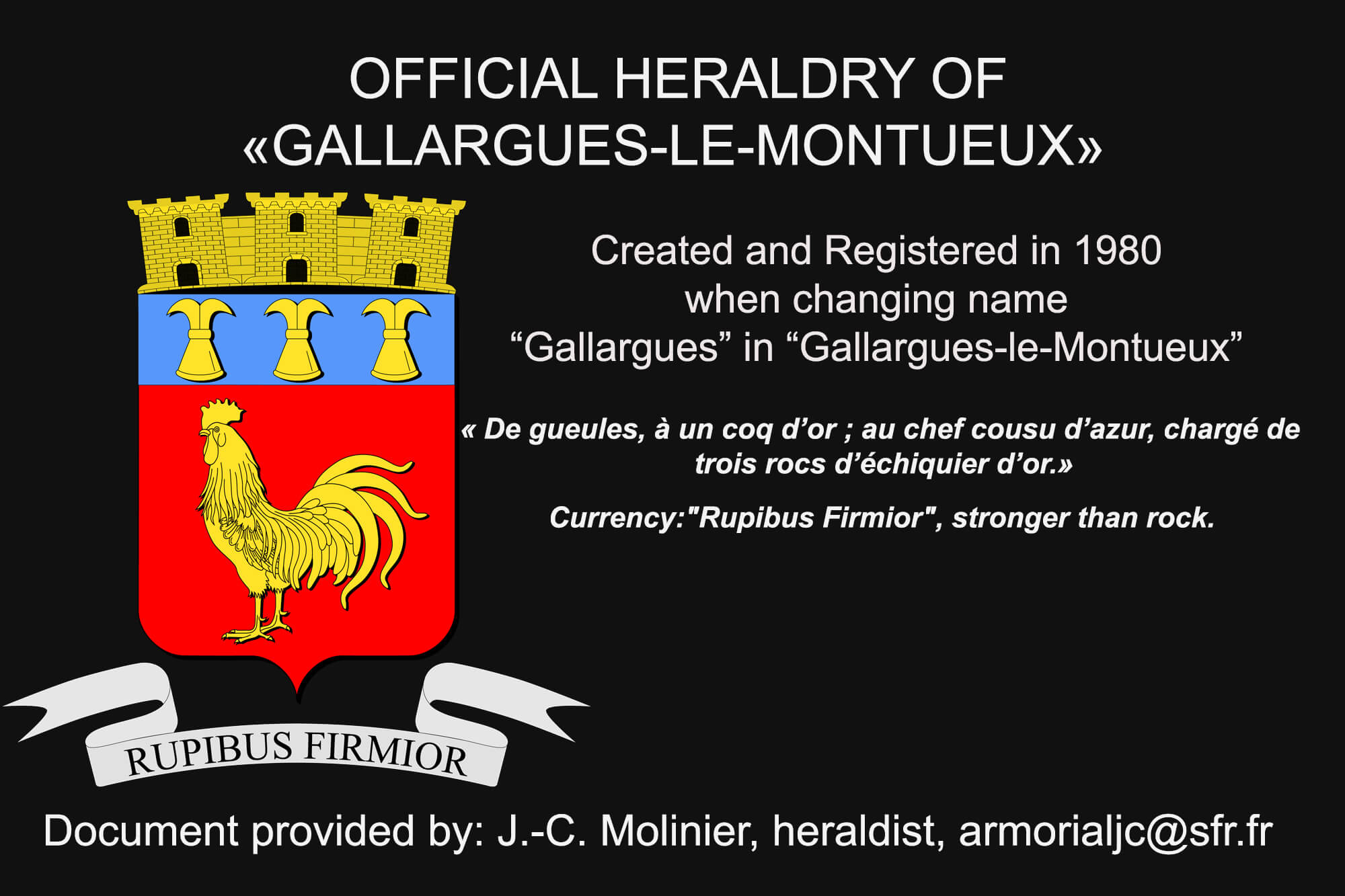 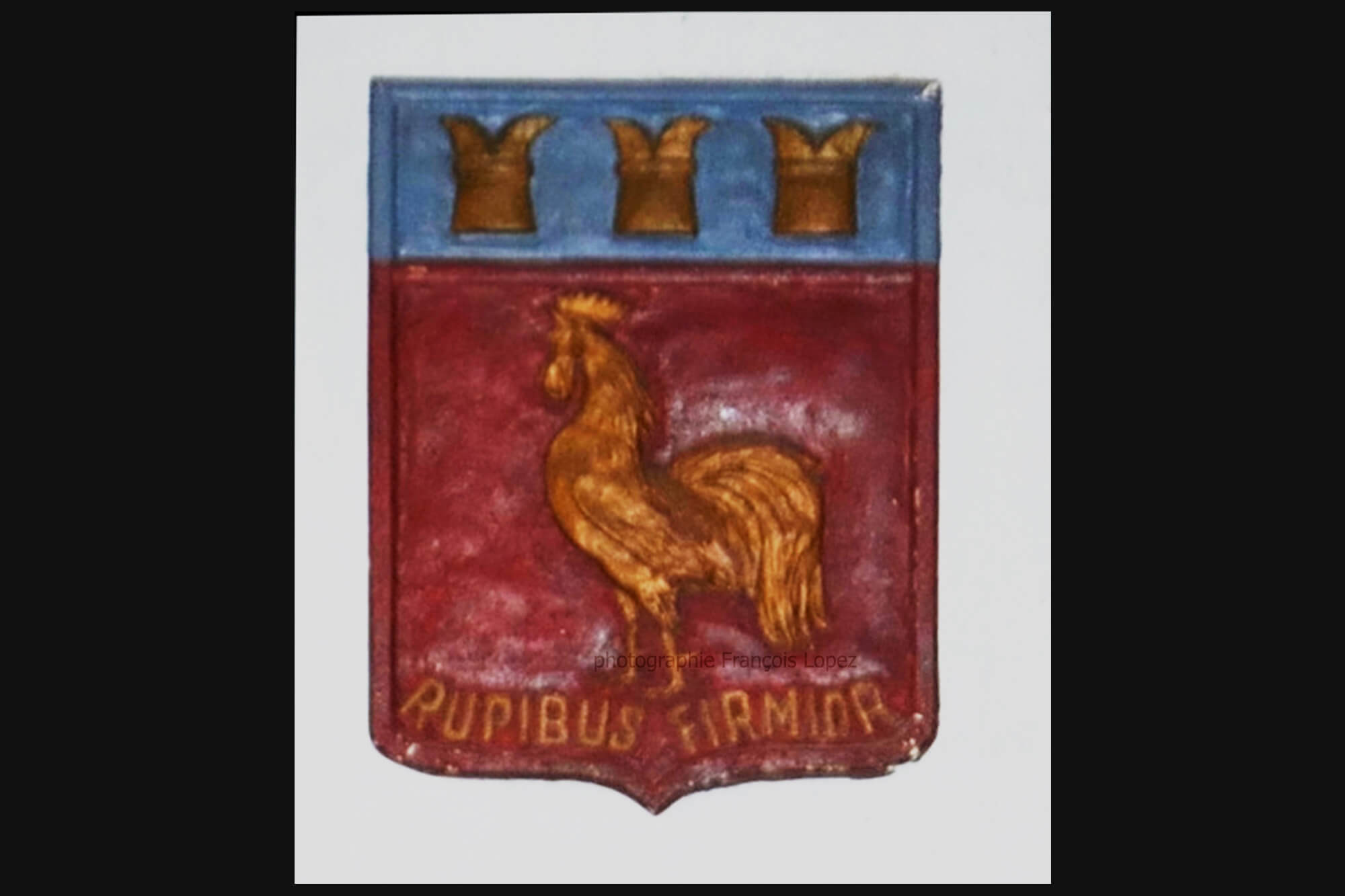 Sculpture of the coat of arms in the council chamber of the historic town hall of Gallargues.

Coat of arms on the town hall's letterhead. 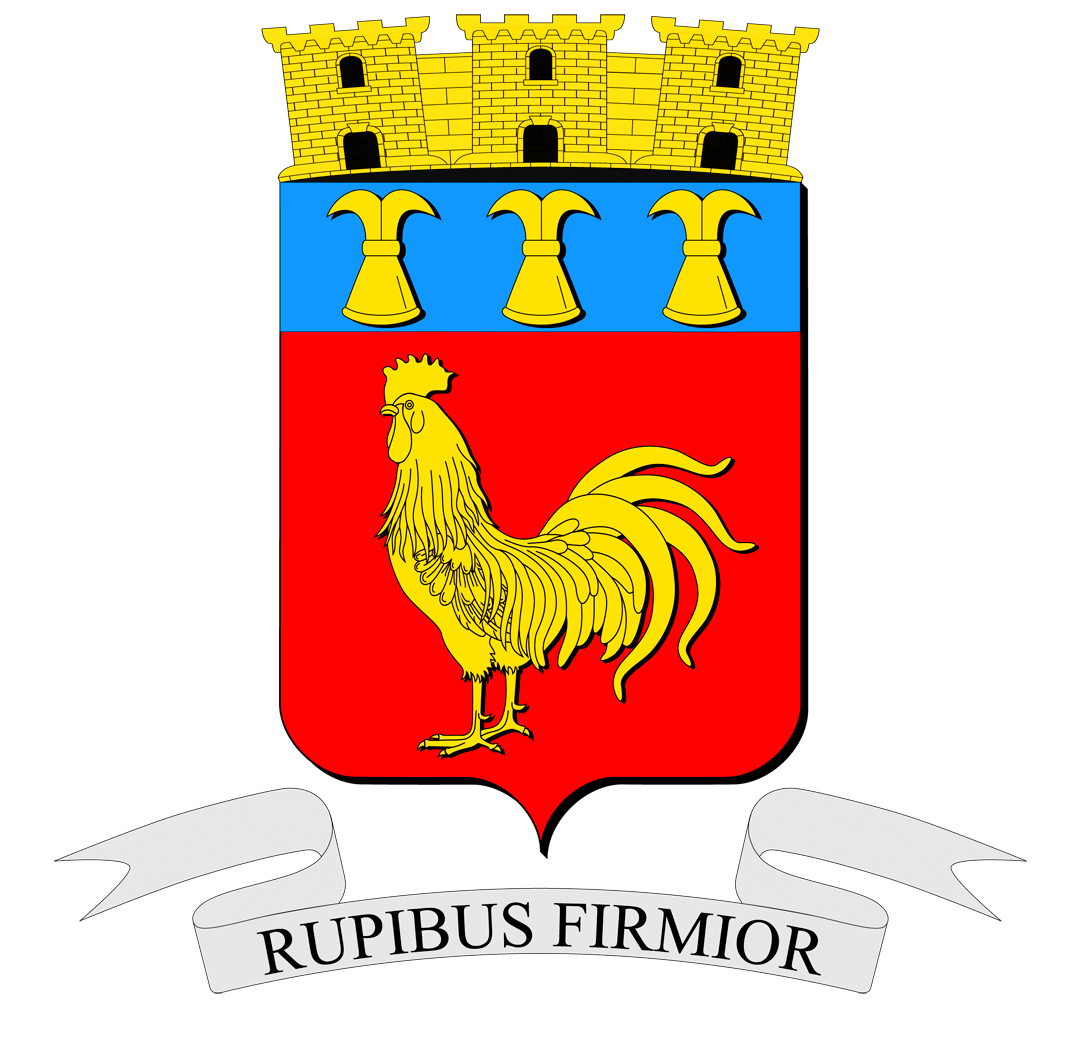 Name of Latin origin with the suffix "argues" which means the agricultural area of. Two names of owners are possible:
Either Gallus, a person from Gallia (Celtia of the Romans, called Gaul since the 19th century),
or Galatus, a person from Galatia (Celts settled around the present-day Ankara in Turkey). Gallargues is thus either the area where the so-called Gallus lives, or the one where Galatus lives.

Heraldic clarifications and adjustments made:

The shadow effects are mandatory to visualize the reliefs of the different components constituting the coat of arms. They are always directed from the angle of the dexter chief to the sinister point.
The shield is the first affected by this shadow effect since it corresponds to the shield worn by the recipient, represented in particular by the crown and the ornaments which are the foreground.
The gules is the first level of the shield, called field, a bit like a tray on which the elements which must appear in relief will be placed; this is the reason for the shadow on the rooster and the chessboard rocks.
The head has no shadow because it is specified stitched, ie joined with the field on the same level ; as there is no thickness, there is no shadow.

Heraldic confusion and history of the coat of arms of Gallargues

The coat of arms of Gallargues-le-Montueux has been forgotten, which explains why the municipality made one in the 1980s, in good faith. The question that must be asked is how is it possible that a coat of arms is lost and how to explain that it has never been found until today?

The coat of arms of Gallargues was indeed blazoned by d'Hozier (Hozier is the general judge of arms and coats of arms), you have a copy of the written record of the volume 1 Languedoc preserved in the cabinet of titles, Page 817, office of Montpellier, N°34, August 1700 in the figures which parade. This description was drawn for the first time (1697-1710 TOME 14 LANGUEDOC P641. but adding masonry stones to the tower, which was not originally indicated. A coat of arms made according to the original description is shown in the scrolling figures.

During the attribution of coats of arms under the Ancien Régime, the College of Heraldry recorded the latter in a register and gave a duplicate to the recipient. On August 4, 1789, the Constituent Assembly adopted the principle of the Abolition of privileges, both of the lords and of the church and the communities of inhabitants (The ancestor of the communes). The final text will be published on August 25, 1792. In many places in France, there will be the opportunity to irretrievably destroy a considerable amount of old documents, charges, proof of possession, including coats of arms. Only the royal archives will escape this destruction operation because the young deputies needed them to build the foundations of our republican nation. A documentary base on the possessions of the nobles, the clergy and the third estate was needed to erect the new building where all these privileges would be removed. It is therefore quite natural that the nascent municipalities will lose sight of their coat of arms, wrongly considered as a mark of their feudalism. It was not until the law of 1884 that municipalities could once again display their coats of arms; heraldry is reborn but with people who are no longer the heirs of the old codes, the break was too long and the science of heraldry lost its fundamentals, a phenomenon that still persists today. The municipalities which have not kept their title, as can be seen in the museum of Pézenas for the coat of arms of this city, are unaware that they have one; in several cases there will be creation of new coats of arms which have no value because it should not be forgotten that only the first correct coat of arms counts, except modification of the situation of the place (Change of name, merger or detachment of territories etc.) . It will be necessary to wait until the 1980s to see the reappearance of the coats of arms of d'Hozier, and later those of his predecessors to revive the lost coat of arms in several municipalities; this is mostly what happened in the department.

If all the Gard municipalities that had a coat of arms have found it, what explains why Gallargues-le-Montueux remains aside? This case is unique; of all the research I have been able to do, she alone has found herself so deviated. To understand what happened, you have to go back to the troubled history of Languedoc at the time of the Reformation, when the Protestant religion took root in the region of Montpellier and spread to the Cévennes and you have to accept the idea that d'Hozier's clerks often got their brushes mixed up.

The first clashes will take place in Nîmes in 1560. The end of the Protestant revolt will not be effective until 1632, and again there will be attacks against them from 1661 to 1683 when King Louis XIV yields to the Clergy of France resulting in the Revocation of the Edict of Nantes; in 1702 we have the revolt of the Camisards for two years. The persecution that follows will be so fierce that it will forever mark the Cévennes spirit. During this time of trouble, a state is born within the state; the Catholic supporters remaining in the royal organization while the Reformed organized themselves around university and commercial centers, such as Montpellier. For the zone which concerns us, that of Gallargues-le-Montueux, we arrive at the result that certain localities of the diocese of Nîmes, whose consuls are organized according to the king, detach themselves in fact to turn towards Montpellier, because their lords embraced the cause of the Protestants. Gallargues-le-Montueux is one of those, the lord of Mandagout will be a good element there since three quarters of the population will convert to the Reformation; he even asked Geneva to send a pastor there to celebrate worship; all from the nerve center of Calvinist Montpellier, to the great displeasure of the diocesan council of Nîmes, which officially protested to the King of France. In addition, the town belongs to the barony of Lunel, yet of the diocese of Montpellier. From these two points follows the fact that it is at the Montpellier office, and not that of Nîmes, that the coat of arms is registered; it is presented above. 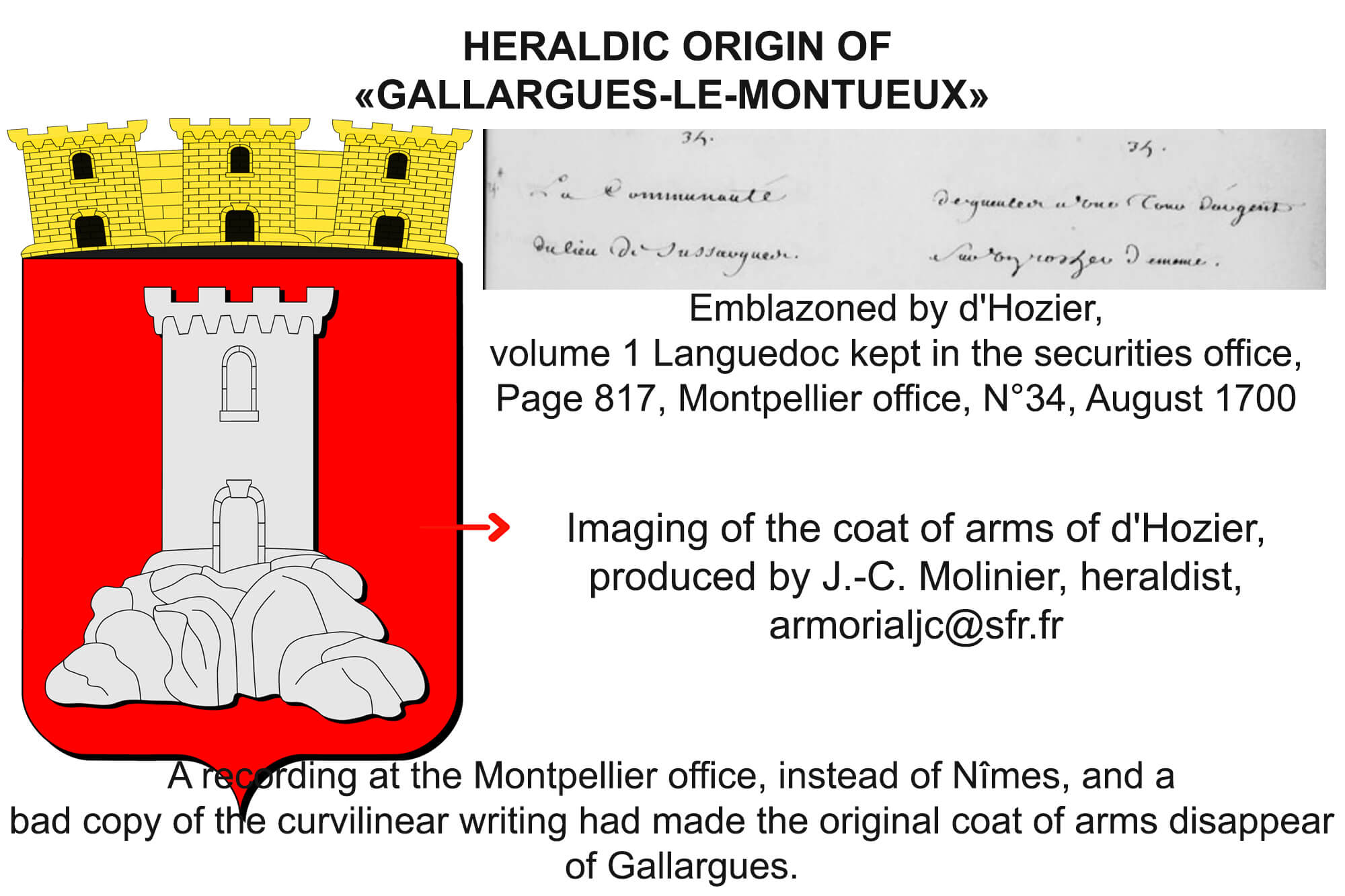 Emblazoned by Hozier: Hozier is the general judge of arms and coats of arms. 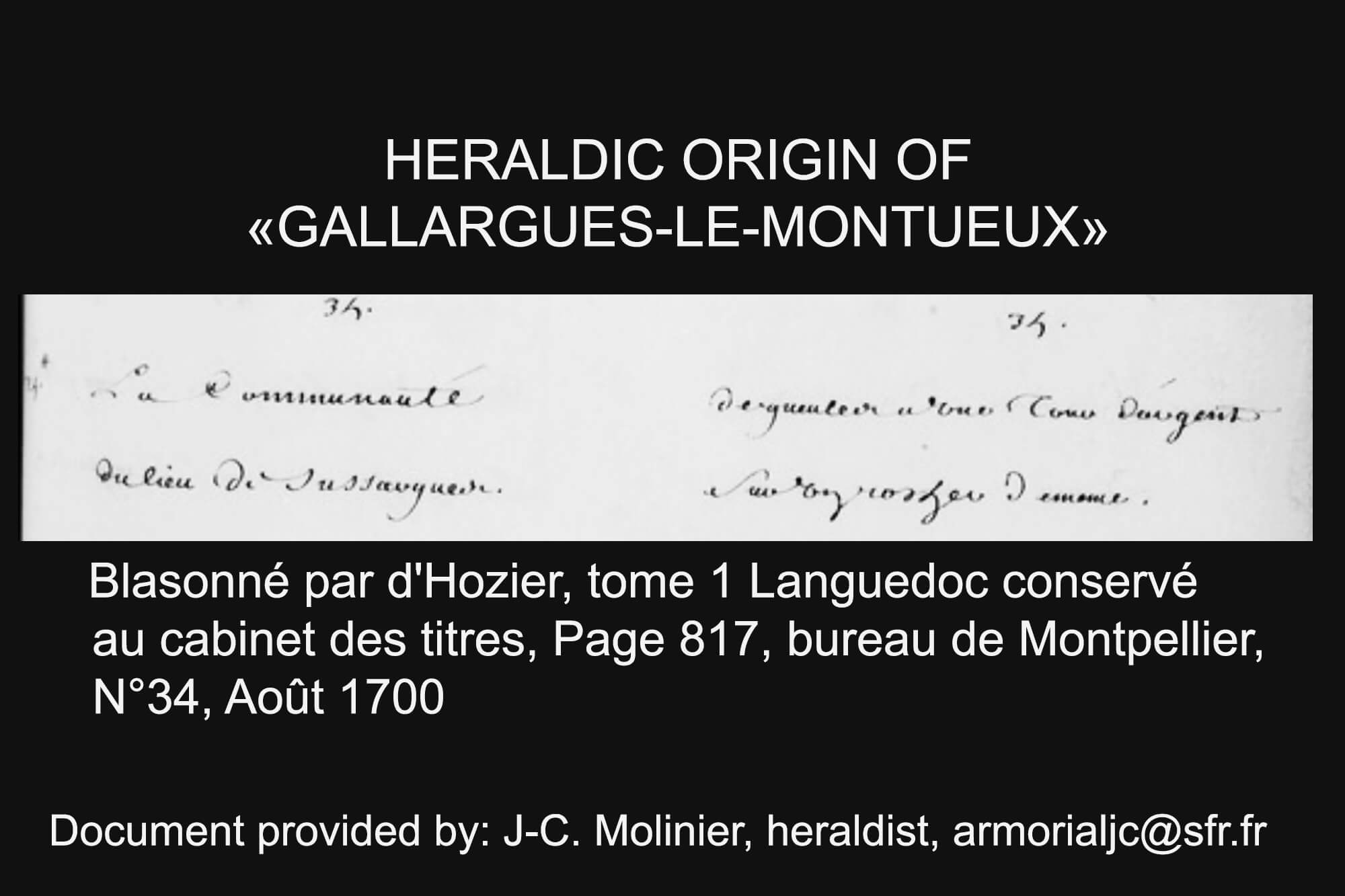 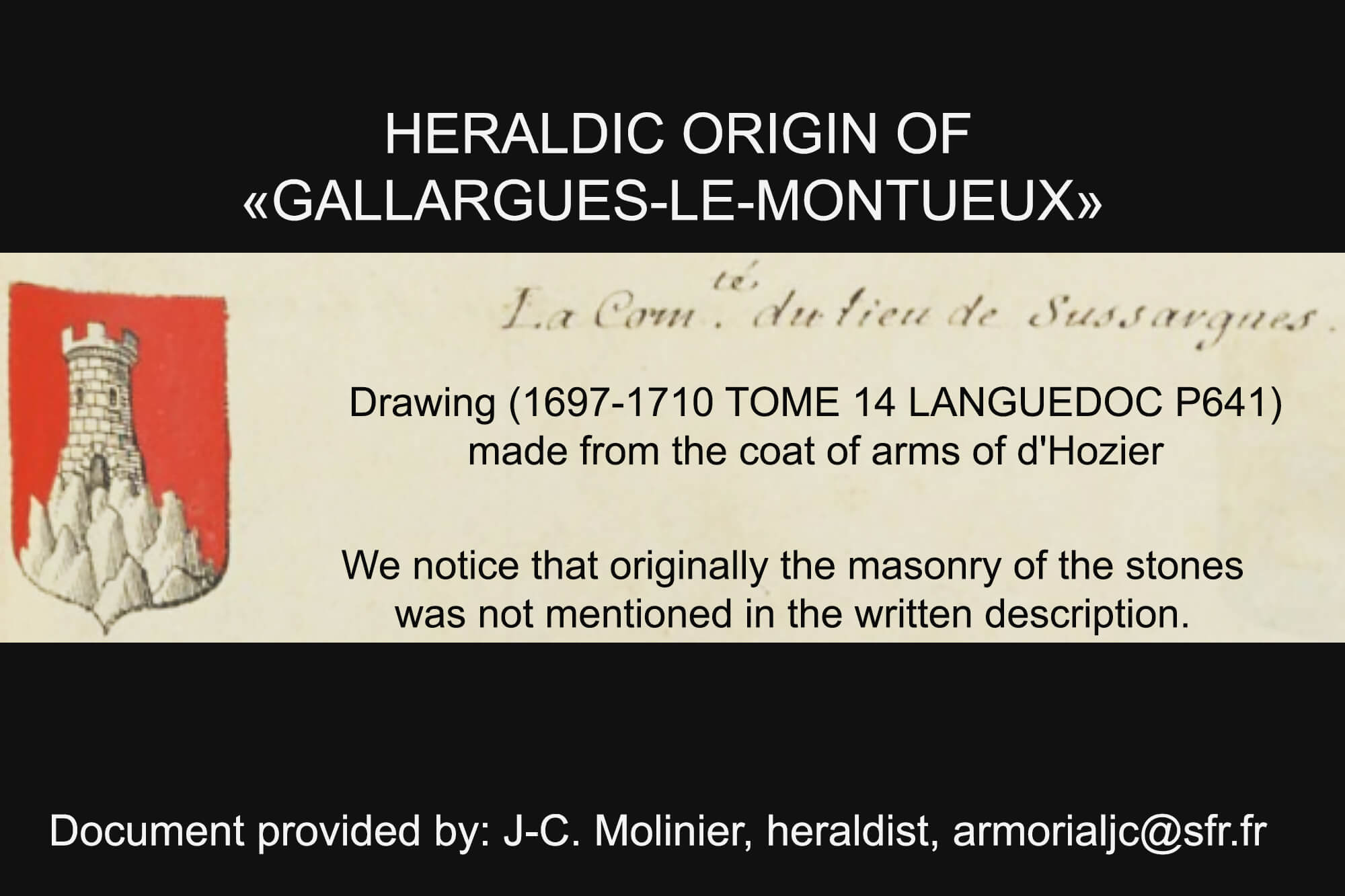 Drawn for the first time (1697-1710 TOME 14 LANGUEDOC P641.) but adding masonry stones to the tower, which was not originally indicated. 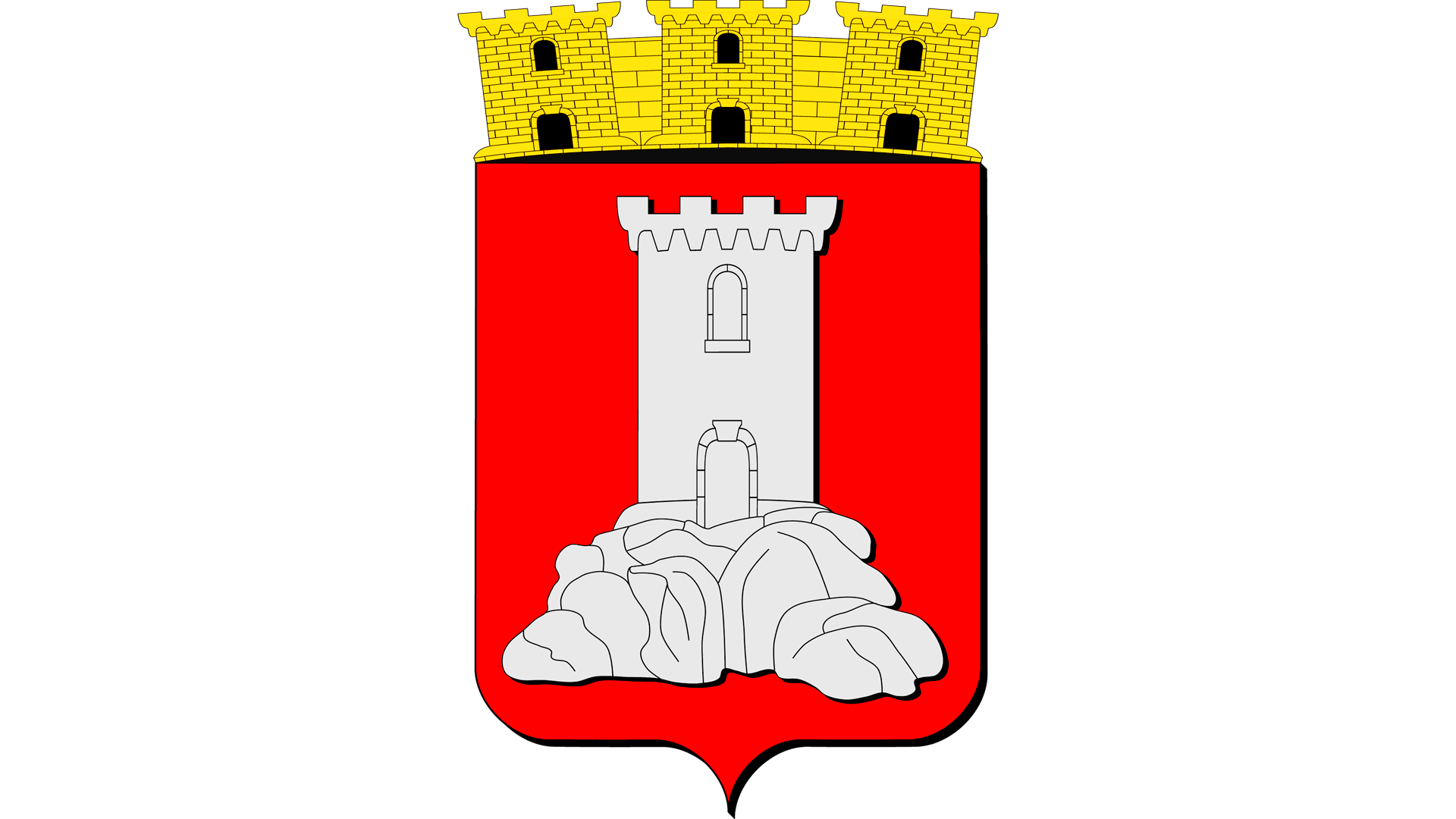 An error by Hozier's cabinet

Where we very seriously suppose an error is when we discover in volume 14 Montpellier-Languedoc the recording of a coat of arms for the community of Susargues (Azure, to Saint Martin on horseback, sharing his coat with a beggar, all Or) and one for that of Sussargues (Gules, to a tower Argent on a rock of the same). No community of inhabitants having paid for two coats of arms, there are therefore two villages with similar names: Sussargues and Susargues (which Izarny Gargas curiously named Sudargues in his book devoted to d'Hozier page 224). Sussargues is a town in today's Hérault in the former diocese of Montpellier. The registration of his coat of arms at the Montpellier office is therefore quite natural. The mystery remains intact and it is not the shortcuts taken on certain "heraldic" sites that will help us. We no longer understand anything when we know that Sussargues wears the coat of arms assigned to Susargues and has always done so. The answer is given to us by the old maps and by the old spellings of Sussargues which give us Susargues in the 17th century. So it is this town that has the coat of arms of Saint Martin under the name of Susargues. But then who is Sussargues? This question has been a real puzzle for me for many years. I consulted all the imaginable maps and tables of ancient places without ever finding another place of this name around Montpellier. Despite my closeness to Sussargues, I never found material there to understand the coat of arms on the rock on the tower; nothing on site suggests that and Sussargues has never had a castle. In fact, it was total chance that led me on the trail allowing me to discover to whom this mysterious coat of arms was attributed. At the bend of a walk near Villetelle, I pass near Gallargues-le-Montueux and there I see the perfect translation of this famous coat of arms with the tower on its rock. Nowhere else in the Montpellier sector are we faced with such a correspondence of images. Is it possible that Gallargues(-le-Montueux) is the Sussargues that no one today can designate with certainty?. Yet never Gallargues was written Sussargues. Yes, but:

So, how to explain that Gallargues is found written Sussargues in the emblazoned collection of d'Hozier and thus colored in the Languedoc-Montpellier manuscript?; well it is very likely that name was badly spelled during registration in the Montpellier office and when the notes were reviewed in the definitive works and it was necessary to decipher the name, it must not have been possible. By looking for correspondence in the diocese of Montpellier, since it is in this office that the coat of arms is registered, the closest name being Sussargues, this is how it is registered, creating an artificial double to the community of Sussargues who already has his.

Jean-Claude Molinier has been a heraldist for 35 years. He produced 650 coats of arms free of charge for municipalities that did not have any and nine for the Gard department. He has written a reference work explaining all the municipal coats of arms of the Gard and presenting them as they should be drawn (not yet published as of August 2022). Email to contact him: This email address is being protected from spambots. You need JavaScript enabled to view it.